A (N-element) vector is \(N\) numbers stored together.

In numpy terms, a vector is a 1-dimensional array.

We often think of 2-element vectors as directional lines in the XY axes. 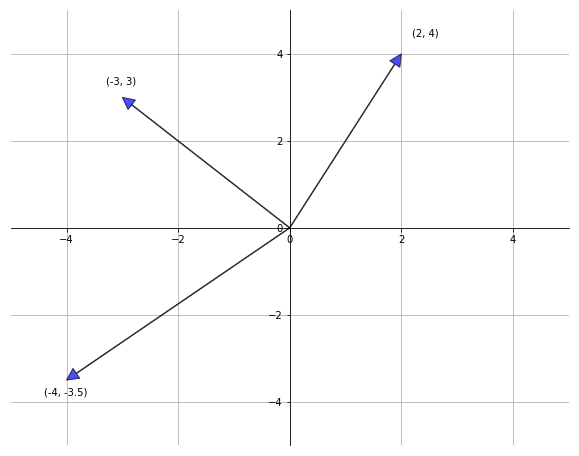 In a previous lecture, we saw some types of operations that can be done on vectors, such as

Another operation very frequently used in data science is the dot product.

We can also use @ to denote dot products (and matrix multiplication which we’ll see soon!).

An \(N \times M\) matrix can be thought of as a collection of M N-element vectors stacked side-by-side as columns.

We write a matrix as

In numpy terms, a matrix is a 2-dimensional array.

We can create a matrix by passing a list of lists to the np.array function.

We can perform element-wise and scalar operations as we did with vectors. In fact, we can do these two operations on arrays of any dimension.

Similar to how we combine vectors with a dot product, matrices can do what we’ll call matrix multiplication.

Matrix multiplication is effectively a generalization of dot products.

The image below from Wikipedia, by Bilou, shows how matrix multiplication simplifies to a series of dot products: 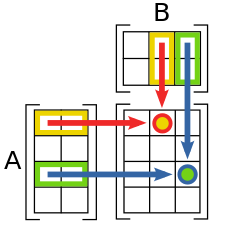 After looking at the math and image above, you might have realized that matrix multiplication requires very specific matrix shapes!

If we think of a vector as a \(1 \times M\) or \(M \times 1\) matrix, we can even do matrix multiplication between a matrix and a vector!

Let’s see some examples of this.

Numpy allows us to do matrix multiplication in three ways.

Despite our options, we stick to using @ because it is simplest to read and write.

A matrix transpose is an operation that flips all elements of a matrix along the diagonal.

In Python, we do this by

In linear algebra, one particular matrix acts very similarly to how 1 behaves for scalar numbers.

As seen above, it has 1s on the diagonal and 0s everywhere else.

If you recall, you learned in your primary education about solving equations for certain variables.

For example, you might have been given the equation

You probably did this by subtracting 7 and then dividing by 3.

Now let’s write an equation that contains matrices and vectors.

Unfortunately, there is no “matrix divide” operation that does the opposite of matrix multiplication.

Instead, we first have to do what’s known as finding the inverse. We must multiply both sides by this inverse to solve.

Consider some matrix \(A\).

Computing the inverse requires that a matrix be square and satisfy some other conditions (non-singularity) that are beyond the scope of this lecture.

We also skip the exact details of how this inverse is computed, but, if you are interested, you can visit the QuantEcon Linear Algebra lecture for more details.

We demonstrate how to compute the inverse with numpy below.

In control flow, we learned to value a stream of payoffs from a single asset.

In this section, we generalize this to value a portfolio of multiple assets, or an asset that has easily separable components.

Vectors and inner products give us a convenient way to organize and calculate these payoffs.

First, calculate the value of this portfolio directly with a sum.

We can make this more convenient and general by using arrays for accounting, and then sum then in a loop.

The above would have worked with x and y as list rather than np.array.

Note that the general pattern above is the sum.

This is an inner product as implemented by the np.dot function

This approach allows us to simultaneously price different portfolios by stacking them in a matrix and using the dot product.

NPV of a Portfolio¶

If a set of assets has payoffs over time, we can calculate the NPV of that portfolio in a similar way to the calculation in npv.

First, consider an example with an asset with claims to multiple streams of payoffs which are easily separated.

You are considering purchasing an oilfield with 2 oil wells, named A and B where

Let’s compute the value of each of these assets using the dot product.

The first question to ask yourself is: “For which two vectors should I compute the dot product?”

It turns out that this depends on which two vectors you’d like to create.

One reasonable choice is presented in the code below.

Now consider the approximation where instead of the oilfields having a finite lifetime of 20 years, we let them produce forever, i.e. \(T = \infty\).

With a little algebra,

The \(V_B\) is defined symmetrically.

How different is this infinite horizon approximation from the \(T = 20\) version, and why?

Now, let’s compute the \(T = \infty\) version of the net present value and make a graph to help us see how many periods are needed to approach the infinite horizon value.

It is also worth noting that the computation of the infinite horizon net present value can be simplified even further by using matrix multiplication. That is, the formula given above is equivalent to

We recognize that this equation is of the form

Using the matrix inverse, where I is the identity matrix.

Note: While our matrix above was very simple, this approach works for much more complicated A matrices as long as we can write \(x_t\) using \(A\) and \(x_0\) as \(x_t = A^t x_0\) (For an advanced description of this topic, adding randomness, read about linear state-space models with Python https://python.quantecon.org/linear_models.html).

Our goal is to determine the dynamics of unemployment in this economy.

Note that with this definition, we can describe the evolution of employment and unemployment from \(x_0\) to \(x_1\) using linear algebra.

However, since the transitions do not change over time, we can use this to describe the evolution from any arbitrary time \(t\), so that

Let’s code up a python function that will let us track the evolution of unemployment over time.

Let’s use this function to plot unemployment and employment levels for 10 periods.

Notice that the levels of unemployed an employed workers seem to be heading to constant numbers.

We refer to this phenomenon as convergence because the values appear to converge to a constant number.

Let’s check that the values are permanently converging.

The convergence of this system is a property determined by the matrix \(A\).

The long-run distribution of employed and unemployed workers is equal to the left-eigenvector of \(A'\), corresponding to the eigenvalue equal to 1.

Let’s have numpy compute the eigenvalues and eigenvectors and compare the results to our simulated results above:

Which of the following operations will work and which will create errors because of size issues?

Test out your intuitions in the code cell below

Compare the distribution above to the final values of a long simulation.

If you multiply the distribution by 1,000,000 (the number of workers), do you get (roughly) the same number as the simulation?