One powerful paradigm for analyzing data is the “Split-Apply-Combine” strategy.

This strategy has three steps:

We will cover the main components in this lecture, but we encourage you to also study the official documentation to learn more about what is possible.

To describe the concepts, we will need some data.

We will begin with a simple made-up dataset to discuss the concepts and then work through extended example and exercises with real data.

To perform the Split step, we call the groupby method on our DataFrame.

The first argument to groupby is a description of how we want to construct groups.

In the most basic version, we will pass a string identifying the column name.

The type of variable we get back is a DataFrameGroupBy, which we will sometimes refer to as GroupBy for short.

Looking at the “groups” inside of the GroupBy object can help us understand what the GroupBy represents.

We can do this with the gb.get_group(group_name) method.

We can apply some of our favorite aggregation functions directly on the GroupBy object.

If we pass a list of strings to groupby, it will group based on unique combinations of values from all columns in the list.

Notice that we still have a GroupBy object, so we can apply our favorite aggregations.

This highlights a principle of how pandas handles the Combine part of the strategy:

The index of the combined DataFrame will be the group identifiers, with one index level per group key.

So far, we have been applying built-in aggregations to our GroupBy object.

We can also apply custom aggregations to each group of a GroupBy in two steps:

We can call this function on our original DataFrame to get the number of missing items in each column.

We can also apply it to a GroupBy object to get the number of missing items in each column for each group.

The key to keep in mind is that the function we pass to agg should take in a DataFrame (or Series) and return a Series (or single value) with one item per column in the original DataFrame.

When the function is called, the data for each group will be passed to our function as a DataFrame (or Series).

As we saw in the basics lecture, we can apply transforms to DataFrames.

We can do the same with GroupBy objects using the .apply method.

Notice that the return value from applying our series transform to gbA was the group key on the outer level (the A column) and the original index from df on the inner level.

The original index came along because that was the index of the DataFrame returned by smallest_by_b.

Had our function returned something other than the index from df, that would appear in the result of the call to .apply.

Sometimes, in order to construct the groups you want, you need to give pandas more information than just a column name.

pandas lets you do this through the pd.Grouper type.

To see it in action, let’s make a copy of df with A moved to the index and a Date column added.

We can group by year.

We can group by the A level of the index.

We can combine these to group by both.

And we can combine pd.Grouper with a string, where the string denotes a column name

Let’s apply our new split-apply-combine skills to the airline dataset we saw in the merge lecture.

First, we compute the average delay in arrival time for all carriers each week.

It looks like more delays occurred during the week ending Sunday December 18th than any other week (except for Frontier, who did worse on Christmas week).

The air_dec DataFrame has information on the minutes of delay attributed to 5 different categories:

Let’s take a quick look at each of those delay categories for the week ending December 18, 2016.

Want: plot total, average, and number of each type of delay by carrier

To do this, we need to have a DataFrame with:

Many sequences of the reshaping commands can accomplish this.

We show one example below.

Let’s summarize what we did:

Suppose now that we want to repeat that analysis, but at a daily frequency instead of weekly.

We could copy/paste the code from above and change the W to a D, but there’s a better way…

Let’s convert the steps above into two functions:

Now let’s look at that plot at a daily frequency. (Note that we need the figure to be a bit wider in order to see the dates.)

As we expected given our analysis above, the longest average delays seemed to happen in the third week.

In particular, it looks like December 17th and 18th had — on average — higher delays than other days in December.

Let’s use the delay_type_plot function to determine the cause of the delays on those two days.

Because our analysis is captured in a single function, we can look at the days together and separately without much effort.

The purpose of this exercise was to drive home the ability to automate tasks.

We were able to write a pair of functions that allows us to easily repeat the exact same analysis on different subsets of the data, or different datasets entirely (e.g. we could do the same analysis on November 2016 data, with two lines of code).

These principles can be applied in many settings.

Keep that in mind as we work through the rest of the materials.

The code below will employ a fairly large simulated data set that has the properties of a order-detail report from Shopify.

We’ll first look at the data, and then describe the exercise

We now describe the want for the exercise, which we ask you to complete.

Read that carefully one more time…

Using the reshape and groupby tools you have learned, apply the want operator described above.

See below for advice on how to proceed.

When you are finished, you should have something that looks like this: 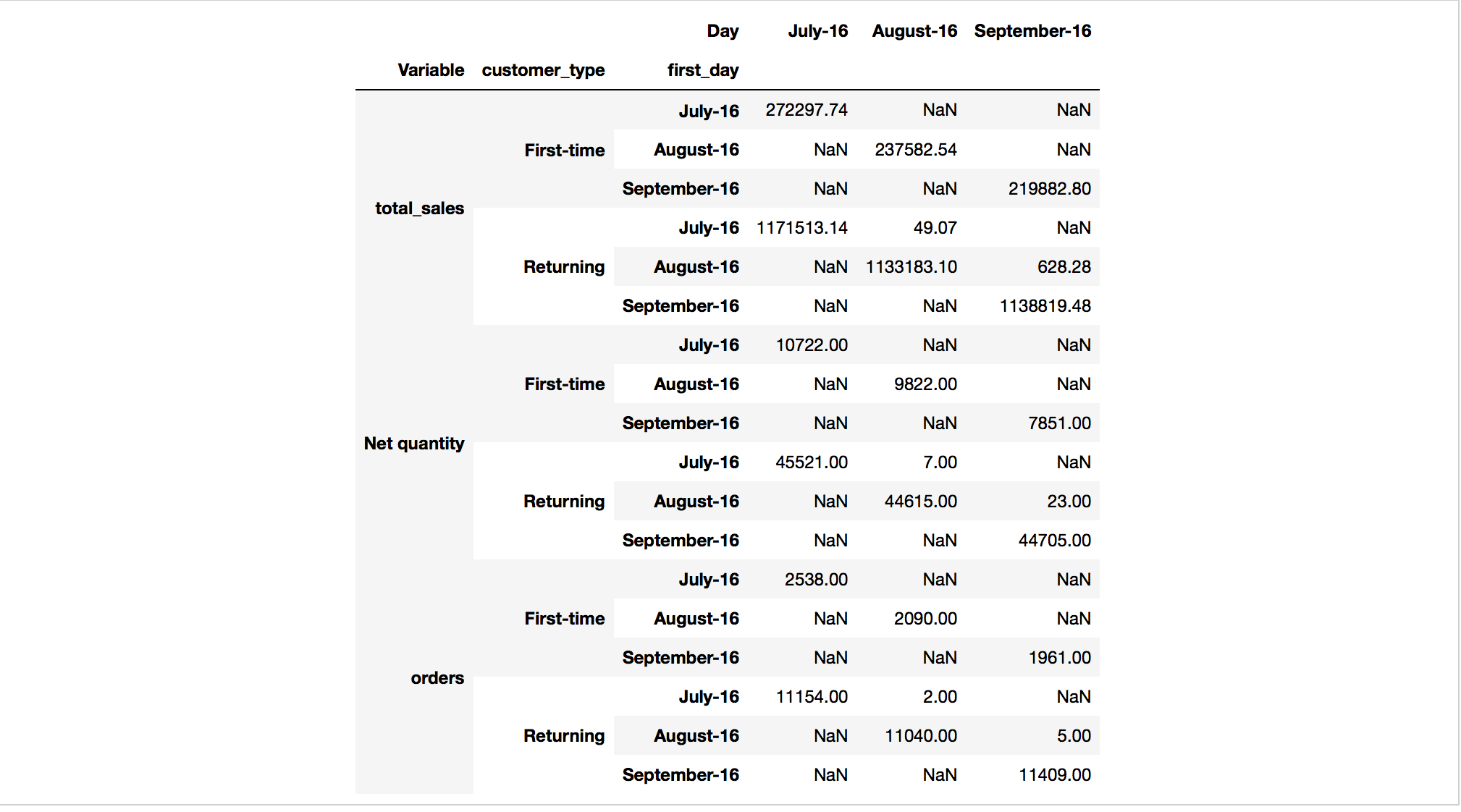 Two notes on the table above:

Your actual output will be much bigger. This is just to give you an : idea of what it might look like.

The numbers you produce should actually be the same as what are : included in this table… Index into your answer and compare what you have with this table to verify your progress.

There is more than one way to code this, but here are some suggested steps.

Look closely at the output of the cells below.

How did pandas compute the sum of gbA? What happened to the NaN entries in column C?

Try gbA.count() or gbA.mean() if you can’t decide what happened to the NaN.

Use introspection (tab completion) to see what other aggregations are defined for GroupBy objects.

Pick three and evaluate them in the cells below.

This exercise has a few steps:

Note that if the group keys remained in the index as the .apply’s output, the merge/join step would have been complicated.

Think about what is shown in the the plots above.

Verify that we wrote the functions properly by setting the arguments to appropriate values to replicate the plots from above.