We have already seen a few examples of basic visualizations created using the .plot method for a DataFrame.

When we use the .plot method, pandas uses a package called matplotlib that actually creates the visualization.

In this lecture, we will dive deeper into the customization options in the DataFrame .plot method as well as look under the hood at how to use matplotlib directly to unlock unlimited control over our figures.

Visualization is a complex subject.

Many books have been written on the subject.

We cannot hope to convey all of what is possible in a short lecture, so we thought we’d try something fun instead.

Our goal in this lecture is to show off some of the common – and some not-so-common – matplotlib capabilities to try to re-create this striking figure from a Financial Times article.

The figure shows how we can see the anticipation of and response to iPhone announcements in Apple stock share prices. 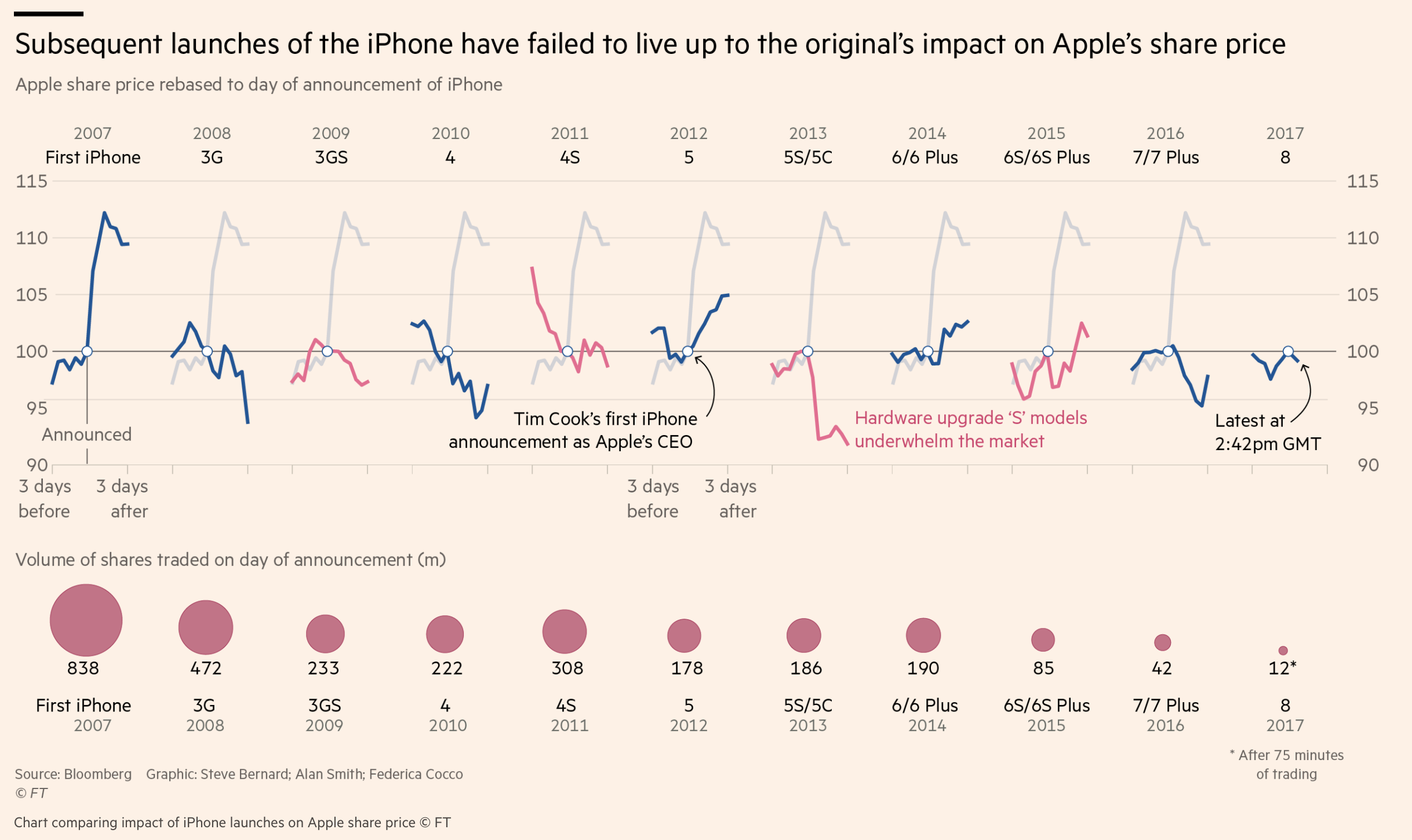 Our goal is to replicate the top portion of this figure in this lecture.

Disclaimer: Many tools you will see in this lecture will be “more advanced” than what you typically use when customizing a plot. Don’t (please!) try to memorize the commands used here – the purpose of the lecture is to show what is possible and expose you a variety of the methods you can use.

Let’s get the data.

First, we create a Series containing the date of each iPhone announcement that appears in the FT original chart.

As there have only been 11 of them and we couldn’t find this “dataset” online anywhere, we will do this by hand.

Most of the time, we will customize our plots by calling methods on an Axes object.

However, things like setting a title over the entire plot or saving the plot to a file on your computer require methods on a Figure.

Let’s start by getting our hands dirty and practicing using these objects.

You should have seen that the object returned by the .plot method is a matplotlib Axes.

As mentioned above, we can control most aspects of a plot by calling methods on an Axes.

We can also create a Figure and Axes beforehand and then tell pandas to plot a DataFrame or Series’ data on the axis.

We typically use the plt.subplots function to create the Figure and Axes.

Below, we use this function to create a Figure that is 10 inches wide by 6 inches tall and filled with a one by two grid of Axes objects.

We can plot from our DataFrame directly on our Axes objects by setting the ax argument when calling .plot.

Let’s continue on our path to recreating the Financial Times visualization from above.

Before we can actually make the plot, we first have to clean the data.

Looking at our goal, we will need share price three days before and after each announcement.

We will also need to normalize the share price to be 100 on the day of the announcement and scale the neighboring days accordingly.

We now want to bring information on iPhone models into the DataFrame.

We do this by:

Now for the second part of the cleaning: normalize the share price on each announcement date to 100 and scale all neighbors accordingly.

Now that we have cleaned up the data, let’s construct the plot.

We do this by using the DataFrame .plot method and then using the matplotlib methods and functions to fine tune our plot, changing one feature or set of features at a time.

To prepare our use of the plot method, we will need to set up some data for what color each line should be, as well as where to draw the tick marks on the vertical axis.

Below, we construct the basic plot using to_plot.plot.

Notice that we have specified a few options as keyword arguments to our function.

That figure has the basic lines we are after, but is quite ugly when compared to the FT figure we are trying to produce.

Let’s refine the plot one step at a time.

First, notice how the -3 and 3 labels are running into each other?

This commonly happens in figures with many subplots.

The function fig.tight_layout() will fix these problems – as well as most other subplot spacing issues.

We almost always call this method when building a plot with multiple subplots.

To do this, we will use the fig.set_facecolor method.

Notice that this worked for the figure as a whole, but not for any of the Axes.

To fix this, we will need to call .set_facecolor on each Axes.

While we are doing that, let’s fix up a number of other things about the Axes:

Let’s continue and add tick labels to the right of the far right Axes.

We can also add tick labels for the x-axis ticks on the 1st and 6th plots.

Now we would like to add a horizontal line that lines up with each vertical tick label (the numbers from 90 to 115) and runs across the entire figure.

This is actually harder than it sounds because most of the “drawing” capabilities of matplotlib are built around drawing on a single Axes and we want to draw across 11 of them.

However, as we promised above, anything is possible and we will show you how to do it.

When matplotlib draws any data – be it a line, circle, rectangle, or other – it must know what coordinate system to use.

We typically think about drawing things in the data’s coordinate system (remember above how we added a white circle at (0, 100)).

However, we might also want to draw using two other coordinate systems:

Luckily for us, matplotlib provides a way to use exactly that coordinate system.

We can now use trans to draw lines where the x values will map from (0, 1) in the Figure coordinates and the y values will go from (90, 115) on the data coordinates.

We will split this line in two to leave room for the text Announced to be added soon.

To add the lines, we will use the data coordinate system from the first Axes.

The last step on our journey is to add annotations that mark Tim Cook’s first announcement as CEO, the lackluster market response to S model announcements, and a label showing that the white dot on each subplot is associated with the announcement date.

Adding text to figures is always a bit verbose, so don’t get too scared by what is happening here.

Now that we have a finished product we are happy with, let’s save it to a file on our computer using the fig.savefig function.

Here, we asked matplotlib to save our figure in the png format, with 400 dots per inch (dpi, meaning each inch has a 400 by 400 set of colored points).

The bbox_inches command is needed here to make sure pandas doesn’t chop off any of our Axes titles or tick labels.

The facecolor argument was necessary because matplotlib will save figures with a transparent background by default (meaning the background is see-through so it “adopts” the background color of whatever website, document, or presentation is is placed in).

We could have chosen a different file format.

Phew, we made it!

We ended up writing quite a bit of code to get the figure to look exactly how we wanted it to look.

Typically, our plotting code will be much more concise and simple because we don’t usually require the same standards for aesthetic properties as professional journalists do.

What type of object is returned from that method?

What methods does this object have?

Using the plt.subplots function, make a Figure with a two-by-one grid of subplots (two rows, one column).

On the upper Axes, plot the adjusted close price.

On the lower one, plot the adjusted volume as an area chart (search for an argument on the plot method to change the kind of plot).

Google for how to set a title for a Figure object and then do so.

Take 5 minutes to explore the different arguments to the DataFrame .plot method. Try to make a plot that is both good looking and interesting ( we know, those are subjective, but do your best!).

You can browse the official pandas plotting documentation for inspiration.

Think about what each of the argument we passed to .plot does.

For some you might be able to guess, for others you will need to look at the documentation.

For your reference, record your findings in a markdown cell below.

Use to_plot.plot? to pull up the docs.

For each operation in the list below (copied from above), make a note of which functions/methods were called to achieve the result. Edit the markdown cell containing the list directly.

Note: This might seem redundant since the comments above give the answers, but forcing yourself to write out the names of the functions will help you remember them when you need them later on.